How is coal processed with FGX separation technology?

The FGX coal preparation process is density based. The separating compartment consists of a deck, vibrator, air chamber and hanging mechanism, as shown in Figure 1.  A centrifugal fan provides air that passes through the perforated deck at a rate sufficient to transport and fluidize the particles.  Riffles located on the deck direct material toward the back plate.  The deck width is reduced from the feed end to the final refuse discharge end.  On introduction of the feed coal into the separation chamber, a particle bed of certain thickness is formed on the deck.  Particles near the bottom of the bed directly contact the vibrating deck and move from the discharge baffle plate toward the back plate under the effect of the vibration-induced inertia force.  On striking the back plate, the particles move upward and inward toward the discharge end of the table.  A picture of a typical FGX separating compartment is presented in Figure 2.

Figure 1. Schematic of the FGX unit 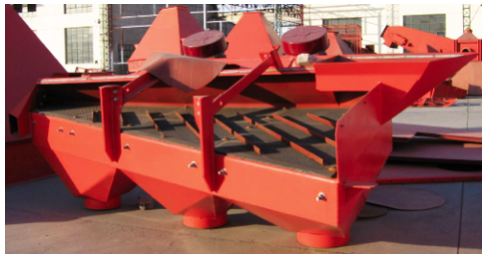 Light particles are lifted toward the back plate at a higher elevation than the dense particles before turning inward toward the discharge point. As a result, light particles form the upper layer of particles that are collected along the length of the table. Particles of sufficient density are able to settle through the autogenous medium formed from the fluidized bed of particles and report back to the deck surface. These heavy particles are forced by both vibration and the continuous influx of new feed material to transport in a helical transport pattern toward the narrowing end of the table, where the final refuse is collected.

In a typical FGX dry cleaning system, the feed is introduced into a surge bin from which the underflow is controlled using an electromagnetic vibratory feeder. Three product streams, i.e., clean (deshaled) product, middlings and tailing streams are generated during the separation process. An air collection system is employed to clean the recycled air and to remove the dust from air being emitted into the atmosphere. This makes FGX separators cleaner than other coal processing methods.